Yesterday was an awesome day. Miniatures museum, that’s all I got to say.

..okay, actually that’s not all I have to say, I have a lot more to say. That place was awesome. They had all originals of so many things and it was incredible. For starters, before you even walk into the museum, there is C-3PO from Star Wars and an ape costume from Planet of the Apes with Mark Wahlberg from 2001. After that, I met Ghostface from Scream 4! Like, legit the real costume that they used for the movie. If you don’t already know, Scream 4 is one of my favorite movies of all time. I looooove it. 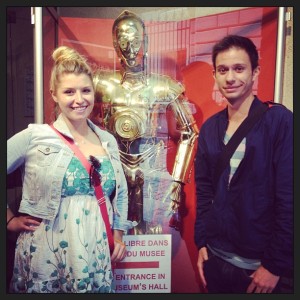 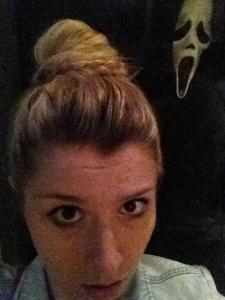 Theeeeennnnnnnnn, I realized they have a REAL-LIFE SWORD FROM PIRATES OF THE CARIBBEAN! Yes, from a scene that Johnny was in. I was so close, yet so far from him..

Basically, that place was awesome and Austin and I were able to hard-core geek out. After the museum, we stayed in Vieux Lyon for the rest of the day and got drinks and food from a boulangerie.. I swear I’m obsessed with those places. So. Much. Quiche.

To end the day, Auburn, Kelsey 2 (There are three Kelseys on this trip so Auburn, Austin and I numbered them all according to the order that we met up with them on the trip) and I went back to Auburn’s to watch a scary movie. If you haven’t learned this already, you will learn that I’m obsessed with horror. Honestly, it’s my absolute favorite genre of anything in life. I’m incredibly “dark and twisty” as Auburn says. Well, we couldn’t get the wifi to load the entire movie, which was Orphan, so we only ended up watching half of it before I had to catch my last bus home. Needless to say, I was scared out of my mind walking the block home from the bus stop after midnight on my own after watching a scary movie. I was quite disappointed in myself. Although, I blame it on the fact that I’m not quite used to my new house yet.