Every year on June 21, France has a party. And I mean a big party. A music party. The entire country explodes in harmony all afternoon and evening and the experience is magnificent.

Basically, there’s a band playing on every corner of every city and you just walk around indulging in the melodies. It’s insanely fun. Free music, good friends and tons of fun define this day. And yesterday was Fête de la Musique.

I spent my afternoon and evening wandering through the streets of Paris and indulging in all that the music had to offer. Just sitting on a hill and getting lost in it all was perfection.

I experienced Fête de la Musique two years ago in Cannes too, and it was splendid. The whole day everywhere is a music lover’s dream.

Anyway, I just wanted to recall how amazing my day was yesterday and how much I’m going to miss this wondrous country when I move back home soon.

Anyone who knows me knows that film and cinema are my life. I’ve been a film buff all my life and horror is my specialty. I mean, Dracula is my all-time favorite novel.. So you could say death and murder entertain me quite a lot.

Anyway, I’ve always fantasized about attending a famous film festival and last weekend I finally made that dream come true. Granted, it wasn’t SXSW or Cannes – which I walked down the red carpet of two yeas ago (in off season)! – but it was still unbelievable in my mind. I was about to attend a Parisian film festival on the CHAMPS ÉLYSÉES and see none other than “The Exorcist.” Yeah, I saw “The Exorcist” at a Parisian film festival. You might be confused like, “What? I thought she said film festival.. Doesn’t that mean NEW films?” Well no, this festival’s theme this year was the history of American and French cinema. So, basically they played numerous famous films from our histories.

Walking up to the theater, there was a line all the way to the street. Everyone was waiting on a red carpet under a lit up arch to walk under. I felt so awesome walking down that carpet and through the arch for my film. Like a movie star, man.

And get this, I’d never seen “The Exorcist.” Me, of all people, had never seen the film that set the precedent for modern supernatural horror. But after seeing it, I can see why it is so famous. Even decades later, I was entirely creeped out by everything I saw. 70’s special effects aside, I was blown away. Every aspect of it was horrific. Two thumbs up, seriously.

So there you have it, my first famous film festival experience.. The Champs Élysées Film Festival.

I’m developing a strange food obsession over here in France. Like I said, I’m eating things I normally wouldn’t try at home and I’m loving them. Things like avocados and tomatoes. But there’s something that I love the most over here that I don’t think I’ll be able to get enough of when I get back to the States. And that’s tomatoes and hunks of mozzarella. Together. I love them.

This country is changing my eating habits in some pretty spectacular ways and I couldn’t be happier. I love all kinds of veggies now and I crave so many healthy things. In addition to tomatoes and mozzarella, I crave salad. I love the salad dressing over here and it’s so simple. To be honest, I have no idea what kind of dressing it is, I just know that it’s a combination of oil and vinegar and possibly dijon mustard? Not quite sure.. But I know that I need the recipe before I go home.

So, there you have it. I never thought my eating habits would become healthier here in France but God worked a miracle and this girl finally loves her veggies. Do you think I said “tomatoes and mozzarella” enough today?

GUYS IT’S SO INCREDIBLY HARD TO MAKE BUT DON’T WORRY, I’LL MAKE IT FOR YOU.

I don’t even know where to begin when talking about this weekend. All I know is that it can be summed up in one word: Indescribable.

We arrived late Friday afternoon and the day was perfect for the beach. Funny thing is, we never really made it there. Friday just happened to be the Fête de la Musique throughout France. Basically it was a big music party.. which is actually what Fête de la Musique translates to. I’m so incredibly clever and witty. Anyway, we go to the hotel to check in and drop all of our luggage off (I say “all of our luggage” but I’m really referring to everyone else’s luggage and not mine. I was smart enough to take only a backpack and cross-body purse. I’m prepared for my two weeks of backpacking I have ahead of me at the end of the summer). So, we get ready in our swimsuits and get all pretty for the beach and then head out.

Walking down to the beach we get distracted (easily) and stop to eat. Afterwards, we’re out looking for drinks and discover an Italian appreciation festival thingy going on and see a sign for STRAWBERRY BEER. Naturally, we run to the sign and grab us some strawberry beer. Delicious. Then, a little closer to the beach, we try to get to it again. Fail. We discover the sidewalk with all of the handprints of the stars and of course we have to read each of them to find out who’s been there. Guess who I found? TIM BURTON. Gah, I was ecstatic. Seriously. I want to work with Tim Burton before I die, like that’s bucket list material. I love that guy. Right next to the sidewalk was the building where the Cannes Film Festival is held and I HAD to get a picture on the red carpet. Like I said, I’ll be there one day, so this was a dream. 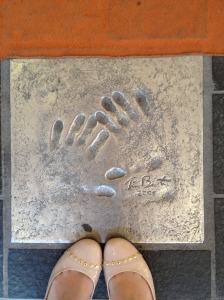 After this, we try yet again to reach the beach. Double fail. We get distracted by cute, shirtless boys street dancing. It was a grand ole’ time. Theeeeen, since it’s the Fête de la Musique, there are outdoor concerts going on that we become enveloped in. It was such a great time. We found a little band playing on a street that we fell in love with. They played Hey Jude and Sweet Home Alabama. WHAT. So, being the loud Americans that we are, we sang and sang and sang at the top of our lungs with the band, while the rest of the crowd awkwardly stared at us as if we were aliens. Technically, I guess we were. It was such a great time. Buuuuut, we never made it to the beach. But we decided that that was quite alright with us because we’d had such a wonderful time TRYING to get to the beach. Well, I take it back that we never made it. We made it but only for about two minutes to look at it and step in the water for pictures. But by then the sun was starting to go down and it was too late to soak in the sunshine. We decided to try again on Saturday.

Saturday morning rolls around and we are ready for some beach time. It was the first thing we did. We actually made it to the beach. Oh man, it was beautiful. There was a huge rock island thingy that was a short swim off of the coast that Austin, Tessa and I adventured to and explored. The Mediterranean Sea is ridiculously salty. I could taste salt for the rest of the day. We stayed at the beach until almost 7pm and got some really good tans – at least I did. No burning. I was pretty happy about that. Afterwards, we went back to the hotel to get pretty again and get ready for dinner.

Dinner rolls around and we find a nice, little place to eat. And man did I eat. I ate an entire pizza to myself. I’m a champ. And then I ate some crème brûlée on top of the entire pizza. I don’t know what came over me but it was awesome. I just kept hearing Jennifer Lawrence in my head talking about eating an entire pizza by herself and I felt invincible. It was liberating.

Then came Sunday. And Sunday meant coming back home to Lyon. And that was a sad thought. Two days at the beach is not nearly enough when you’re in Cannes. But, we had to come home and come back to the real world. Full of studying for quizzes and homework and other such nonsense..

Wait.. what am I talking about? I’m still in France. So the last statement I made about returning to the real world was irrelevant.

Today, we explored Hôtel-de-Ville in Lyon, which is like city hall in Lyon. It was absolutely beautiful. It was like a castle, seriously. As you can see from the photo above. Stunning.

Most of the day, though, I spent looking forward to the trip that we’re taking tomorrow to Cannes. Auburn, Austin, Tessa and I are all spending this free weekend off from school there and I couldn’t be more excited. A weekend at the beach? Yes, please. Not to mention the fact that I will one day be a part of the Cannes Film Festival, so this trip is like halfway part of a dream. Just have to wait a few more years until I’m actually IN the festival itself. Shouldn’t be too long now.