So, it has come to my attention that I should probably update some of you on my Parisian shenanigans since we last spoke. The following is my attempt to sum up all the craziness I’ve encountered lately.

Over Christmas break, one of my best friends, Caitie, came to visit me. We had such a blast and I don’t think I would have been able to get through Christmas in Paris without her. She was a blessing.. So thank you Cait! During the second week that she was here, we went on a backpacking trip from Paris to Brussels to Amsterdam to Berlin to Zweibrücken back to Paris. It was a crazy eight days, to say the least. No matter what, Caitie and I always seem to find ourselves in weird travel situations wherever we go. For instance, during a road trip back from New York City to watch the ball drop on NYE three years ago, we blew a tire and got stranded on the Ohio turnpike and had to drive back to Chicago (about six more hours) on a donut. Another time we went to Vegas for NYE (last year) and ended up all having to take different flights home due to weather. This trip was no exception. I’ll start from the beginning.

We decided to just spend one day in Brussels because we’d been told that’s all we needed. So we arrived at noon and then had reservations for a bus at 4am the following morning. We didn’t get a hostel because, “What’s the big deal? We’re young, we can stay up till four and bar hop!” ..We were tired by 3pm and ended up seeing a movie to just chill out. We’re older than we thought..

Well, 1am rolls around and we decide to go back to the train station, get our bags out of the lockers and just sit and maybe nap till our 4am bus. As soon as we sit down, our stuff in hand, a security guard comes around to tell us that the station is now closed and we need to get out. UM OKAY SIR, WE’LL GO WANDER THE STREETS OF BRUSSELS FOR THE NEXT THREE HOURS UNTIL OUR BUS ARRIVES. So rude. I mean, who closes a train station!? I bet his name was Stove.. “Stove.. Whatakinda name is that?” ..Anyway, we start walking around the city with all of our bags and see this guy wandering around aimlessly as well and it was obvious the he was in the same situation as us and decide to follow him without him knowing. After about five minutes, Caitie runs up to him, “Tu parles français?” “No.” “English?” “Yes.” “YAY!”

Turns out he was, in fact, kicked out of the station too and had nowhere to go either. I announced to him that we’d be sticking with him now and hoped he didn’t mind.. He didn’t. Good thing too, because I would have continued to follow him anyway. So we all start walking around and stumble upon an open Quick (kind of a European McDonald’s) that was staying open until 6am. We happily stroll inside and buy some fries and get settled. We were going to be there for the next three hours, after all. Anyway, Caitie goes to the bathroom and Richie (that’s our new friend’s name) and I move tables to a more comfortable area. Right as I’m about to turn around to grab the fries, the last thing left on the table to transfer, a man comes up to the table, inspects the fries and then grabs an entire handful and walks out. I MEAN WHY DOES THIS STUFF HAPPEN TO US? But oh well, I’m assuming he needed them more than us.

We all settle into our little booth and start a game of 20 questions to get better acquainted for the three hours we have together and before we know it, our peace has been disturbed. A little woman comes in with a young couple and starts throwing french fries and sauce packets at everyone in the restaurant and ends up in a fist fight with just about everyone there, including the innocent Christmas tree in the restaurant window. I mean, the tree didn’t even do anything to her. It was just an innocent bystander in this tiny woman’s he-man strength psychotic break. She ends up being escorted out by police and we’re left sitting in awe at what just happened. Again, I’m telling ya, this kind of stuff happens on every trip we have, no lie. 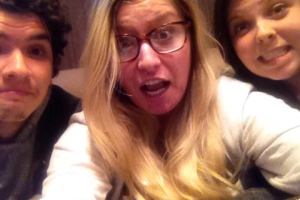 After the Christmas tree fiasco, we find ourselves realizing it’s almost time for our bus and we start to head back to the bus stop. Richie walked us safely there (even carrying my bag for me, such a gentleman) and we parted ways to head to Amsterdam where even more turmoil was awaiting us, we just didn’t know it yet. But that’s a story I’m not quite willing to tell yet..

Cait and I spent NYE in Berlin at Brandenburger T’or and had a crazy, wild night filled with music, fireworks and champagne. We had a wonderful, yet somewhat crazy time, as usual, throughout the whole trip. 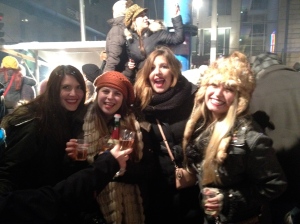 After Berlin, we found ourselves riding the train to Zweibrücken, where Cait’s wonderful family was awaiting our arrival to show us all around the southern region of Germany and spoil us like crazy for three days. We had such a fantastic time getting to know all about Germany’s history, eating hearty German food and drinking dark German beer. We can’t thank the Kerfins enough for all that they did for us those few days – they were wonderful and so amazing to us. 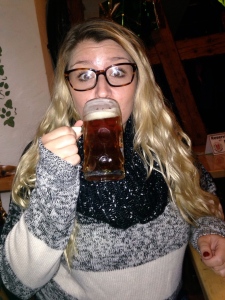 And to finish off our time together, we came back to Paris where we slept like babies for the night until Cait had to be at the airport the next morning to return to the good ole’ US of A. I had an unforgettable time with her and am so thankful she took the time and money it cost to see me for the holidays. I’m already dreaming up our next trip and can’t wait to see where we go next!

Since then, I’ve been kinda chillin’ out in Paris just hanging out with my favorite ladies, doing quiz night at The Highlander, you know.. the usual. I had a great trip but I also realized how much of my home Paris has become.

2 thoughts on “Christmas Break in a Nutshell”