So, today was all about stepping outside of my comfort zone.. Although, I don’t really have a comfort zone, I kind of just love to explore. I mean look at what I’m doing now – a few months ago I decided I wanted to somehow come back to France and now I’m here living in Paris for goodness sake. Yeah, I kind of just do anything and everything. But that’s not the point!

The point is that today I did new things and explored. I mean, I’ve been in Paris for like four days now, it’s about time that I get out and do things. So I basically did it all. Let’s start at the beginning..

Today was my first day walking A to school by myself. Only been here a few days and I didn’t even get lost. It probably does help though that I had an 8 year old there to help me if I took a wrong turn – EVEN THOUGH I DIDN’T. We didn’t even get lost once. Boom. And then I had to walk ALL THE WAY BACK ON MY OWN. And guess what.. I still didn’t get lost! Go me. So yeah, anyway, I walked A to and from school all alone and it was great. I waited there for him at the school after he went in and I watched him play in front.. Until he saw me creeping and came over to the fence and said, “Megan, it’s good. You can go now.” I basically felt like a rejected parent. If I knew what a rejected parent felt like. But I don’t.

After all the school shenanigans, I made crêpes! But not just any crêpes. No, no. I made chocolate breakfast crêpes that were basically better than I ever could have imagined them to be in the mere three hours I’d had to look forward to them. Even the kiddos said they were delicious! Okay.. Maybe they just said, “Mmm, these are very good,” but I’m paraphrasing and in my mind I heard, “Delicious!” And that’s that.

Next, the kiddos wanted to go to the cinema so we did. On the Champs Elysées. Like yeah. The freaking Champs Elysées is where we saw a movie. Planes 2. It was pretty good.. I think. The best part was the fact that both S and A cuddled me during it and it just really made me feel like this next year will be wonderful.

AND THEN MACAROONS. OH MY GOODNESS THE MACAROONS. We went to Ladurée and got macaroons. I hadn’t had one in over a year. MMMMMMACAROONS. 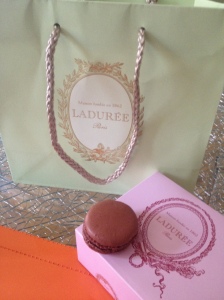 Then tonight, I decided to skip out on dinner with the family because I wanted to explore. Found out that there are multiple Dior, Chanel, Michael Kors, Gucci and Tom Ford stores within a ten minute radius of my apartment. Excuse me but where is it that I’m living?! ..Oh wait, that’s right. PARIS. I don’t think I’ll ever get used to it but that’s fine by me. My exploring led me to places I hadn’t been before (isn’t that the point?) and all the while, my Mom is on the phone with me sharing in the experience, apparently freaking out over my lack of concern about where I am and where I’m going. All I knew on this hunt was that I wanted quiche, orangina and wine. Took me an hour of walking because most shops were already closed but I found all three! And even got some free chocolate truffles from a nice store owner when I went in to buy some wine. He was quite nice if I do say so myself. 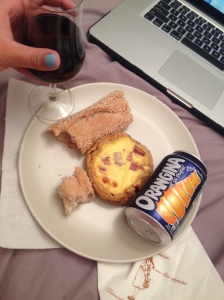 All in all, quite a lovely day in Paris.